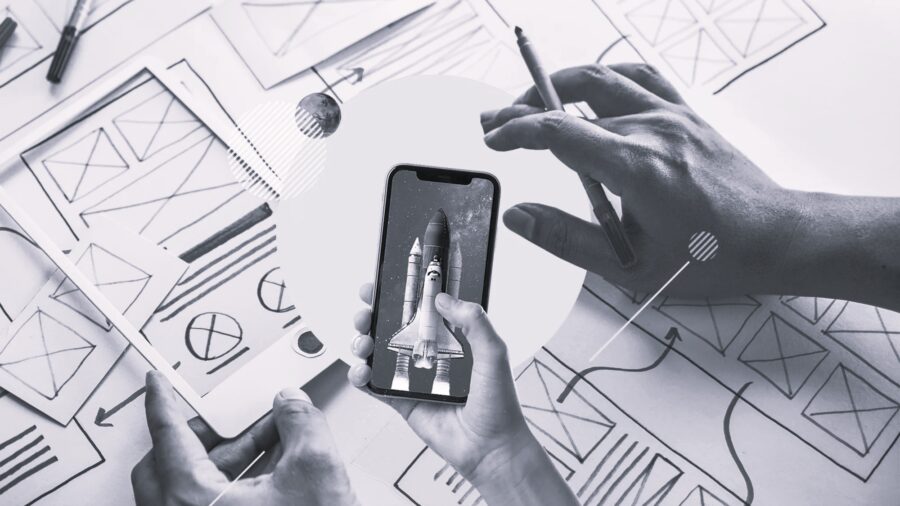 What should the first version of the app be? Is it a prototype or Minimum Viable Product (MVP)? What is the difference between the two? What are they used for? This article describes the definitions of these two digital product testing options and their relative benefits. This includes understanding and using them here in Betahubs.

In our experience, the agile approach to creating digital products is the most effective. It not only guarantees full engagement between the user and their needs, but also provides a high degree of flexibility. In this way, you can quickly and easily redirect your project if the planned product does not meet the new requirements.

Digital product development becomes even more efficient when the agile scrum methodology is combined with the lean startup approach. Lean startup can incorporate both prototyping and MVP stages in a structured process that turns business ideas into concrete, detailed propositions. It uses testing and data to refine the product vision. Following this, scrum’s iterative sprint-based approach is ideal for actually building the product, and later scaling it.

Depending on the product you’re developing, its scope, and the target user group, you’ll find that either a prototype or an MVP app is sufficient to validate your initial business idea. Both of these approaches save time and money, so you don’t have to invest heavily in a huge and complex platform without first going through either (or both) of these steps.

The prototype is like the first draft of the product. It’s not a sketch of the back of a napkin (by definition, a sketch of a napkin can be a prototype and is perfectly useful if it helps solve a problem!), But it’s definitely a low-tech, low-performance item. A kind of clickable trailer for its main function. Prototyping is a quick way to test the basic ideas and assumptions behind a product.
In contrast, MVP is a usable version of the product with only core functionality, ideal for testing, providing feedback and useful data, but the time and expense spent in this phase. It’s minimal.

To highlight the differences between a prototype and an MVP:

In practice, according to what you need, these definitions can blur – a prototype may be more detailed, or an MVP more basic. Our experience at BetaHubs means we tend to produce prototypes with more functionality, but there is still a clear difference between them and our MVPs:

At the heart of the lean startup approach, and any agile development methodology, is the product’s intended user. After all, how can you really know if you’re building something that people will want and use unless you ask them?

The key difference to using an MVP is that with a prototype you’re testing the concept and potential visual experience of using the product. A prototype has no features or functionality, no engineering (or very little). It is something to put in front of users (or stakeholders, or investors as very often it’s used as a pitch tool) in order to validate the look and feel of the product. It’s your first ‘real world test’ of your concept and as such it’s done quickly, with minimal development, time or resources. If that sounds a little ‘light’, not giving users much to go on, that’s okay because a prototype aims to get a reaction, not detailed feedback. You don’t want your testers to start imagining the final product (effectively designing it in their heads). You just need to know their reactions to the business idea, the product concept – is there an audience for it and are you headed in the right direction, are the key questions.

The benefits of prototyping

In addition to the main benefits of testing a proposed product with real users in an efficient way to use time, money and resources, there are many other benefits to prototyping a digital product. there is.

Apart from the primary benefit of reaction testing your proposed product with real users in a way that makes efficient use of time, money and resources, there are a number of other advantages to creating a prototype of your digital product.

One of the key principles of the Lean Startup approach is validated learning. That is, a measurable (and useful) response from the intended user that affects the design. We’re discussing quantifiable data that drives real improvements in future product iterations, such as revenue, user engagement, and evidence-based feedback. Eric Ries, the inventor of Lean Startup, defined MVP as “… a new product version that allows teams to maximize their validated knowledge of their customers with minimal effort.”

The word ‘minimum’ is important here. There is nothing extraneous in an MVP. In fact, another definition of an MVP would be, a product which has just enough features to gather validated learning about the product and its necessary further development.

Unlike a prototype, which conceivably could be a sketch on a napkin, an MVP is always a functioning version of the product. Usually focused on one or two core features, an MVP can be used, tested, played with. You’re not asking theoretical questions of your test group, you’re observing their use of the MVP and gathering specific feedback of a practical nature. However, let’s be clear… an MVP is not just the final product with a few features missing; nor is it an early release version of the final product (though it may well lead to one). An MVP is an experiment, testing part of your solution with the people who are experiencing the problem with the resulting data guiding you to produce a better, more marketable version of the final product.

The benefits of MVPs

Like prototypes, MVPs are a method of testing and gathering feedback; all part of an efficient digital product development process. That efficiency is demonstrated in a number of ways.

Finally, let’s not forget the development team. Putting out an MVP is motivational: there’s a tangible representation of the future product; an MVP signifies progress.

So, which should you use: Prototype or MVP?

Both are techniques used to test the product earlier in the development process, without having to commit to building the whole product first. As such, both prototypes and MVPs can be used to reduce costs, reduce risk, and even reduce future technical debt. If you need to test the basic product concept and you’re working within a very limited budget, create a prototype.

If you want to compare a features performance against what users really want, build an MVP.

Do you want measurable feedback from users or an initial gut reaction? Do you need a response and commitment from investors? There is no clear winner. Which option is better depends on the stage of the project and on the audience you have available. When our team is working on a proposal, they always choose the solution that best fits the user needs, budget and business aims.

If you’re not sure which option would work best for you, you can use our App Cost Calculator, a simple tool that also helps define what kind of solution you need. BetaHubs team is always happy to chat and help you with your challenge, so feel free to Contact Us as well!